Expectations are high for a very rare coin that hits the auction block in March 2020 in Baltimore. A very rare 1884 Proof Trade Dollar could sell for half a million dollars or more.

The 1884 Proof Trade Dollar holds a place of honor in the pantheon of U.S. numismatic rarities as one of only ten specimens minted and known today. The 1884 Trade dollar is a legendary U.S. Mint rarity, ranking among the “100 Greatest U.S. Coins” (Garrett & Guth, Whitman Publishing 2019).

BIRTH OF THE TRADE DOLLAR

Trade dollars were born out of the Mint Act of February 12, 1873, which became to be known as the Crime of 1873, which embraced the gold standard and demonetized silver. The Crime of 73 was a give and take proposition… Giving a slightly greater amount of silver subsidiary coins, while taking away obsolete coins, including the regular silver dollar.

The Mint Act of 1873 gave the world a completely new coin, the Trade Dollar, designed by William Barber, the fifth chief engraver of the U.S. Mint. It was an equal bullion value coin that was slightly heavier than the ordinary silver dollar, intended to compete with the Mexican Peso, and Pieces of Eight, in Far Eastern Trade Commerce, and not intended for domestic circulation.

The 1884 Trade dollar is one of the most mysterious issues in all of American numismatics, originally thought to have been created clandestinely by parties within the Mint, at night.  Although there were rumors of its existence in the 19th century, no examples were known, until 10 specimens of the 1884 Trade dollar surfaced after the death of a Philadelphia coin dealer, William K. Idler in 1901, who had close ties to U.S. Mint officials.

The real story is that there were actually 264 proof Trade dollars struck and delivered to the cashier on January 19, 1884. After which the U.S. Treasury sent orders to the Mint forbidding the production of proof Trade dollars for sale to collectors. William Idler, who had a personal relationship with U.S. Mint Superintendent Snowden, somehow acquired 10 proof sets of the date, including the Trade dollar, right after they were struck. It’s thought his friends at the Mint tipped him off with the inside information, so he could secure the 10 coins before the directive could take effect when the remaining 254 proofs were melted.

The ten 1884 Proof Trade dollars were reportedly found still in the original proof sets of that date, among many other numismatic treasures, by Idler’s son-in-law Captain John W. Haseltine, and his business partner Stephen K. Nagy, both notable coin dealers of the day. Once their existence became known, the 1884 Trade dollars became one of the most sought-after issues in the American series. Each of the ten Trade Dollars has made their way into world-class collections, with pedigrees from the “who’s who” in numismatics.

The current specimen for sale at the Stacks-Bowers Auction at the Whitman Expo in Baltimore in March 2020. Graded Proof-64+ Cameo (PCGS), it ranks as the fourth finest of the 10 known examples of 1884 Proof trade dollars, first appearing on the market in an ad placed by dealer Edgar Adams in the March 1915 issue of The Numismatist, and since has resided in several significant cabinets including those of Waldo C. Newcomer in 1916, B. Max Mehl in 1931, Colonel E.H.R. Green in 1945, and Amon G. Carter, Jr. in 1984 when it sold for $45,100. Today, auction estimates are at $500,000.

The 1884 Proof Trade Dollar is infrequently offered at auction… Every appearance is a historic opportunity. Acquiring one of these Trade dollars represents a monumental numismatic prize; a hallmark of only the most fabled and accomplished United States coin collections. 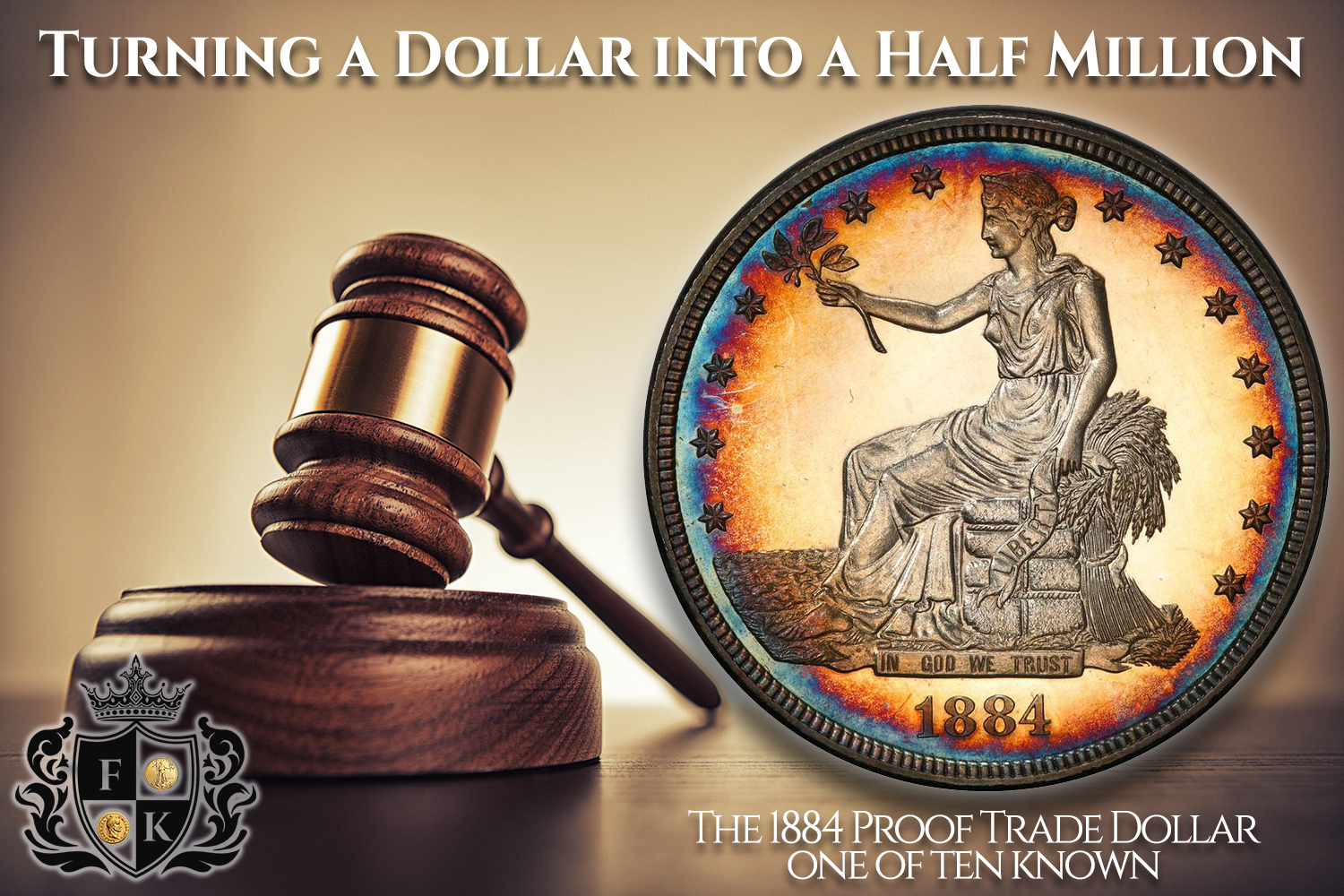